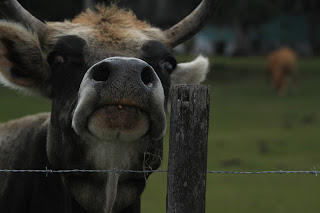 Following up on my last post about antibiotic resistant bacteria--I read an eye-opening article in the October 2015 issue of Consumer Reports.

The article, "How Safe is Your Beef?" examines the issue of food poisoning associated with ground beef. According to the article, in July of this year, 13.5 tons of ground beef and steaks were contaminated with dangerous E. coli O157:H7 that can cause intestinal illness and  death. The meat was recalled before any food poisoning was reported. And contaminated beef caused 80 outbreaks of E. coli between 2003 and 2012. Beef is also responsible for salmonella outbreaks.

Consumer Reports conducted their own tests on 458 pounds of ground beef. The beef was categorized by type--conventional, without antibiotics, organic, and grass-fed. They tested the meat for common bacteria found on beef.

Conventional beef is the most common, coming from cattle that are penned in feedlots, fed with soy and corn, and given antibiotics to boost growth and prevent disease. Grass fed cattle are raised in pastures and feed on forage. Organic grass-fed cattle cannot be given antibiotics or hormones.

While all of the samples contained bacteria, Consumer Reports' study found that conventional beef had twice the percentage of antibiotic resistant bacteria than beef from the more sustainably produced grass-fed cattle (18 percent vs. 9 percent of samples).

The Ag Web, powered by Farm Journal posted an article "Consumer Reports Study Confuses Serious Safety Issues, Potentially Misleading Consumers about Beef Safety," which states the bacteria found by the study "are not the type of bacteria commonly associated with foodborne illness in ground beef." The article notes that food poisoning is typically caused by improper handling and cooking vs. the method of farming.

The article also noted concerns that the study might lead people to think they do not have to fully cook grass-fed or organic beef. They also question the accuracy of the results, as they state that Consumer Reports was not able to verify whether or not the beef they tested were from cattle that actually received antibiotics.

Both articles do note that the safest temperature for ground beef is a fully-cooked160 degrees F. Eating rare or medium ground beef will put you at risk for food poisoning.

It can be said that conventional beef production has allowed farmers to provide sufficient amounts of beef to meet the growing demand at a lower price. And not all families can afford to spend the additional $2.88 per pound difference between conventional beef vs. grass-fed organic beef as noted in the Consumer Reports article. 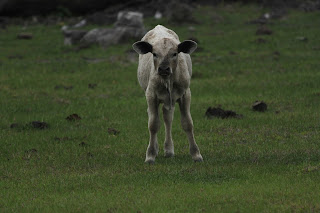 However, at 2 pounds per week, the additional $260 to $310 per year might not be a burden for many people. Grass-fed cattle can live a good life. They can roam and graze, eating their natural foods. Conventional cattle are confined in tiny spaces, fed starchy grains. They're sometimes fed candy, plastic pellets (for fiber), chicken coop waste and worse.

For those who can afford it, let's help promote the more humane treatment of these animals that help sustain us humans.