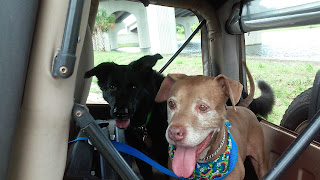 Axe had a lump on his side that turned out to be an abscess. After two different antibiotics didn't resolve the problem, he had surgery, where the vet found his microchip had migrated and become infected. He removed the microchip and cleaned the site, but Axe is now on 3 antibiotics trying to resolve the infection.

Our veterinarian mentioned a similar problem he personally had, where a tiny rose thorn pricked his thumb and it became severely infected. It took 3 different antibiotics to get it under control.

And when I got pneumonia a couple years ago--again 3 antibiotics and no success. Finally after taking two different antibiotics at once I got better.

The Centers for Disease Control and Prevention (CDC) calls this Antimicrobial Resistance--"the ability of microbes to resist the effect of drugs." According to the CDC, it's impossible to avoid the risk of these antibiotic resistant infections. In the press, these microbes are called "superbugs."

Bacteria find ways to develop resistance to the drugs we develop. This can be a real problem for humans and animals. It seems odd that something as small as a microbe can bring us down, but that's the case. Below is a short infographic from the CDC describing how antimicrobial resistance works. 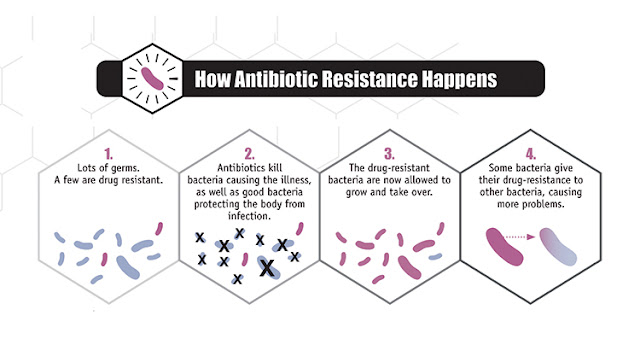 Several factors have made antibiotic resistance more commonplace:
The CDC tracks cases of "superbug" infection, and has a report on the top 18 threats. At the top of the list, under "Urgent Threats" is Clostridium difficile. Called CDIFF for short, a recent study found it caused infections in almost half a million people in one year. The one you hear about most often, Methicillin-resistant Staphylococcus aureus (MRSA) is further down, under the category of "Serious Threats."

So how can we combat these miniscule destructive microbes?
The CDC calls this "antibiotic stewardship." Which is an important way to be stewards of our good health as well.